You are here: Home / All / Birthstone Breakdown #1: October Through December

Birthstones: We all have them, but where did they come from and what do they mean?

This post — the first in a series of four — will give a brief history on the origins of birthstones, then go into detail about the gems assigned for the next three months: October, November and December.

The concept of birthstones has its roots in the Old Testament. The book of Exodus contains a passage that describes the Breastplate of Aaron as a majestic piece of armor inset with 12 distinct jewels, each representing one of the 12 tribes of Israel. Biblical scholars, still somewhat connected to polytheistic religious traditions, linked these 12 stones with the 12 signs of the Greco-Roman zodiac, establishing the first association between gemstones and time of year.

Later, in the eighth and ninth centuries, the stones became associated with the Twelve Apostles. During this time, the church actually mandated that the general public honor each of the apostles by wearing a different stone every month, further reinforcing the link between the stones and months of the year.

Over the centuries, these customs shifted and evolved, but it wasn’t until 1912 that “birthstones” were made official. The U.S. organization then known as the National Association of Jewelers published a list of standardized stones, one for each month of the year. Since then, there have been a few additions / alternative stones mixed in, but the general list remains the same. The most widely accepted roster of birthstones consists of the following: 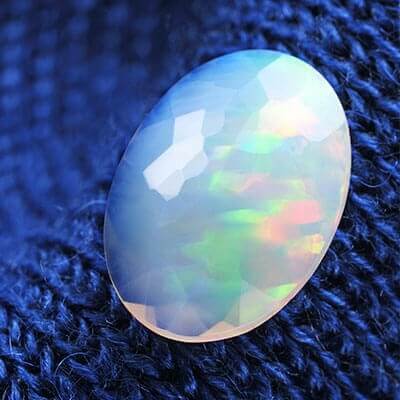 Famous for their eye-catching rainbow flecks, opals are some of Earth’s most enchanting gemstones. The overall appearance of an opal generally falls into one of several color patterns: white opal, black opal, fire opal (bright redorange), boulder opal (turquoise-blue, often mottled with brown) and water opal (also known as crystal or jelly opal for its transparency). While base colors vary, all varieties of the stone contain those distinctive iridescent flecks that make it appear as if lit from within.

Opals are primarily sourced from Southern Australia, but can also be found in the Southwestern U.S., Mexico, Ethiopia and the Czech Republic. Their molecular structure is unique in that it consists of a tightly packed mix of spherical silica and water molecules. Their formation tends to occur near sites of ancient geothermal activity, and most stones date back between 65 and 145 million years, marking their origins in the Cretaceous period — also known as the time of the T-Rex.

Historically, opals have been adored by Cleopatra, lauded by Shakespeare and popularized by Queen Victoria, who made Australian black opals a worldwide craze in the wake of their discovery. 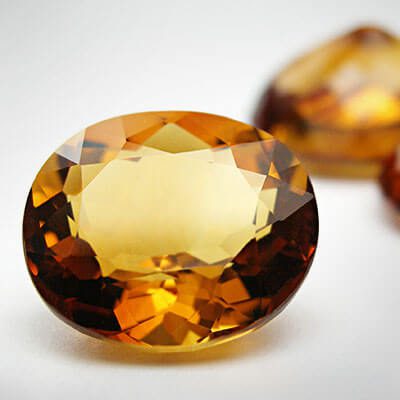 In its natural form, topaz is most frequently found in shades of rich gold and golden brown, but impurities in molecular structure can change the stone’s color to red, orange, pink, gray, blue or clear. Natural occurrence of these colors is rare, so most topaz that appears outside of the golden-brown spectrum has been heat-treated or irradiated to achieve its hue. This adaptability of color, in addition to its hardness and wide availability, make topaz a popular choice for jewelers and jewelry lovers alike.

Topaz is a silicate crystal that develops in both granite and volcanic rocks. Brazil leads the world in topaz exports, but it’s found in many other regions around the globe, including the U.S., the Ural Mountains of Russia, Sri Lanka, Afghanistan, Japan, Scandinavia and Australia.

The stone was first brought to Western civilization from Sri Lanka, where it was introduced to the Greeks and Egyptians. Throughout history, it’s been endowed with a variety of superstitious properties including protection, life lengthening, prevention against lunacy and good fortune. Whether you ascribe to these beliefs or not, topaz is a beautiful addition to any jewelry collection, and one that November babies can wear with pride. 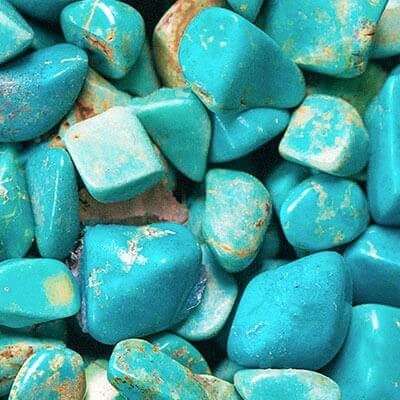 Opaque, deeply saturated, and threaded with mesmerizing veins of brown, gray or gold, this striking blue-green stone is one of the most instantly recognizable of the birthstones.

Turquoise is a secondary mineral, meaning that its formation results from chemical reactions with a primary mineral — in this case, copper. It is typically found in arid regions with ample copper deposits including the Southwestern United States, Mexico, Iran and Turkey (the latter being the region to which it owes its name).

The stone is not only notable for its intense color, but also for the cultural significance it has held for a wide range of civilizations — both ancient and modern — all over the world. It is frequently found in ceremonial pieces, jewelry and burial items for peoples ranging from Ancient Egyptians and the Aztecs to the Navajo, Pima and Apache tribes of the American Southwest.

While specific cultural associations vary, turquoise has generally been endowed with spiritual properties relating to protection, prosperity and vitality, giving those born in December one more reason to incorporate this stone into their collection.

Interested in more birthstone-related content? Check back in January, when we’ll be covering garnet, amethyst and aquamarine. And if your birthstone pendant, ring or bracelet needs a refresh, My Jewelry Repair can repair and restore any piece of jewelry to its most brilliant condition.