You are here: Home / All / Ancient Sumer – The History of Jewelry Around the World

When it comes to looking good, human beings have gone to varying degrees and lengths in order to distinguish themselves since pretty much the beginning of time — most often by things that they wear, carry, or use day-to-day or during a special occasion.

Humanity has also used accessories in ways like marking those who have made the transition to the afterlife, not to mention commemorating individuals of importance.

Of course, human beings didn’t up and automatically discover precious metals and most certainly didn’t come out of the womb knowing how to cut diamonds and other gemstones into works of art, much less in order to pull off a distinctive look — Europe wouldn’t catch on to that idea until sometime around 1300.

Before the earliest civilizations on record, jewelry forms of varying complexities began to pop up during prehistoric times. Forms of jewelry included ornaments that could be worn on every part of the body. Crowns, tiaras, diadems, hairpins, combs and beauty products, earrings, lip rings, nose rings, earplugs, and other forms of jewelry were starting to be worn by both men and women.

Accessorizing in the Ancient Middle East

Before the 1300s, ancient folks wore accessories made of bones, shells, antlers, feathers, and pebbles — making the most out of hunted animals, found stones/minerals, fossils, etc.

As far back as 5,500 years ago, ancient Sumerians began to construct their cities along the rivers of Lower Mesopotamia. People became somewhat specialized workers in this society and cooperated with each other, resulting in many advances in technology. Sumerians are credited with conceptualizing and creating the wheel, plow, and even their own form of writing (called cuneiform). They were also no slouches when it came to accessorizing! 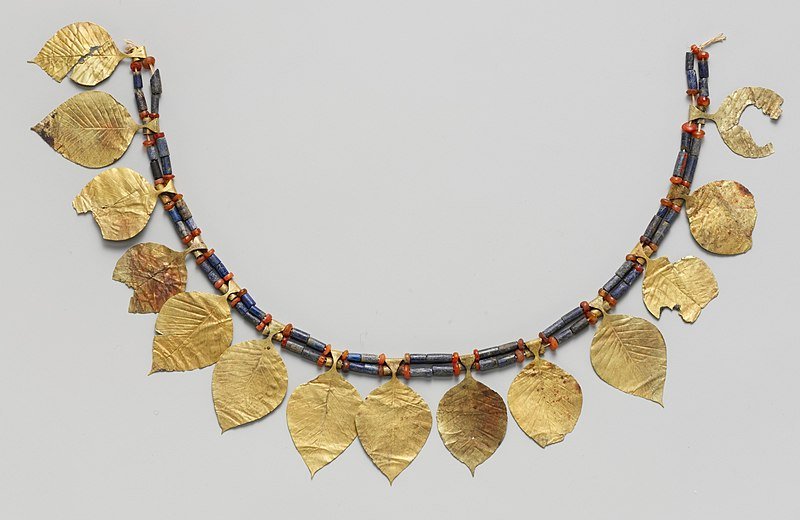 Certain forces must come together in order to help give humanity the time, space, and inspiration it needs to create amazing jewelry. But that would come in due time, once humanity had a little space to settle down and get creative instead of being worried about being chased by velociraptors. Sidenote: we know that velociraptors weren’t running around in ancient Sumer, thank you very much.

Initially, people were bogged down by hunting and gathering their food, which pretty much made it impossible to stake claim on a piece of land and explore what it had to offer. Once human beings began to settle and create the earliest civilizations, this is when agriculture developed and people began to settle along large river banks. This, in turn, led to the discovery of rich mineral deposits, such as gold and other gemstones. Score!

The most ancient examples of jewelry thus far have been found in Queen Pu-abi’s tomb in Sumer (now called Tall al-Muqayyar). Jewelry made for the Queen’s tomb dates back from the 3rd millennium BCE — yeah, that’s a long time ago.

The queen’s body was decorated with an exquisite robe made of gold, silver, lapis lazuli, carnelian, agate, chalcedony beads, and lapis lazuli cylinders.

The queen also wore a headdress which featured a special comb with teeth decorated with golden flowers. The headdress also featured huge golden earrings. A necklace with three rows of semi precious stones laid in the middle of an openwork flower placed in a gold circle. The queen wore many rings on her fingers, wrist and arm bracelets, and more. The custom at the time for the queen, when a queen would pass on, was for her attendants to be ordered to kill themselves in the crypt after the burial ceremony in order to accompany the Queen during her afterlife. We do believe this is an instance of going way too far with one’s accessorizing.

The big takeaway from ancient Sumer is that they were highly advanced when it came to accessorizing (maybe a little too advanced with that last example). Sumerian jewelry pretty much covers the entire gamut when it comes to jewelry developed throughout history. They also incorporated complex technical processes, like welding, stone-cutting, enameling, filigree, and they could even create alloys.

As far as their creative works go, ancient Sumerians could be categorized as realists, getting inspiration for their accessory designs from geometry, surroundings animals, and vegetation.

The next civilization to get creative with their accessorizing were the ancient Egyptians, who deserve their own article. Tune in next time to learn more!

At My Jewelry Repair, we think it’s important to have a sense of the rich histories and cultures of this planet we occupy, and we view ourselves as somewhat of a continuation of that rich and gorgeous history. You can have the confidence that your jewelry and watches will be restored with the utmost seriousness, making sure to do justice to your item and your memories. We treat your prized jewelry and watches as if they belonged to our mothers and fathers. Contact us today to get started on your watch or jewelry repair today!