Ancient Egypt – The History of Jewelry Around the World

For almost 30 centuries, ancient Egypt happened to be the most important and most prominent civilization in the Mediterranean world. Egypt’s unification occurred around 3100 B.C. and ancient Egypt is believed by most scholars to have lasted until 332 B.C. — when it was conquered by Alexander the Great.

Just like the ancient Sumerians, jewelry and personal accessories were of huge importance to ancient Egyptians. The people of ancient Egypt wore a variety of embellishments in order to distinguish themselves, including (but not limited to) earrings, rings, amulets, bracelets, pectorals, tiaras, crowns, necklaces, girdles, and more.

Jewelry and other accessories were made, worn, and shared among both men and women from all classes, ages, and all walks of life.

Certain types of jewelry were worn for social distinction or to indicate things like military rank, economic health, gender, and more.

Most of what we know about ancient Egyptian jewelry has been excavated from tombs, while other forms of jewelry we only know from texts and images that describe or depict these lost adornments.

What’s especially tragic about ancient Egyptian jewelry is that much of it has been lost to tomb and grave robbing. It was a common practice for a thief to melt valuable pieces down to be recast. 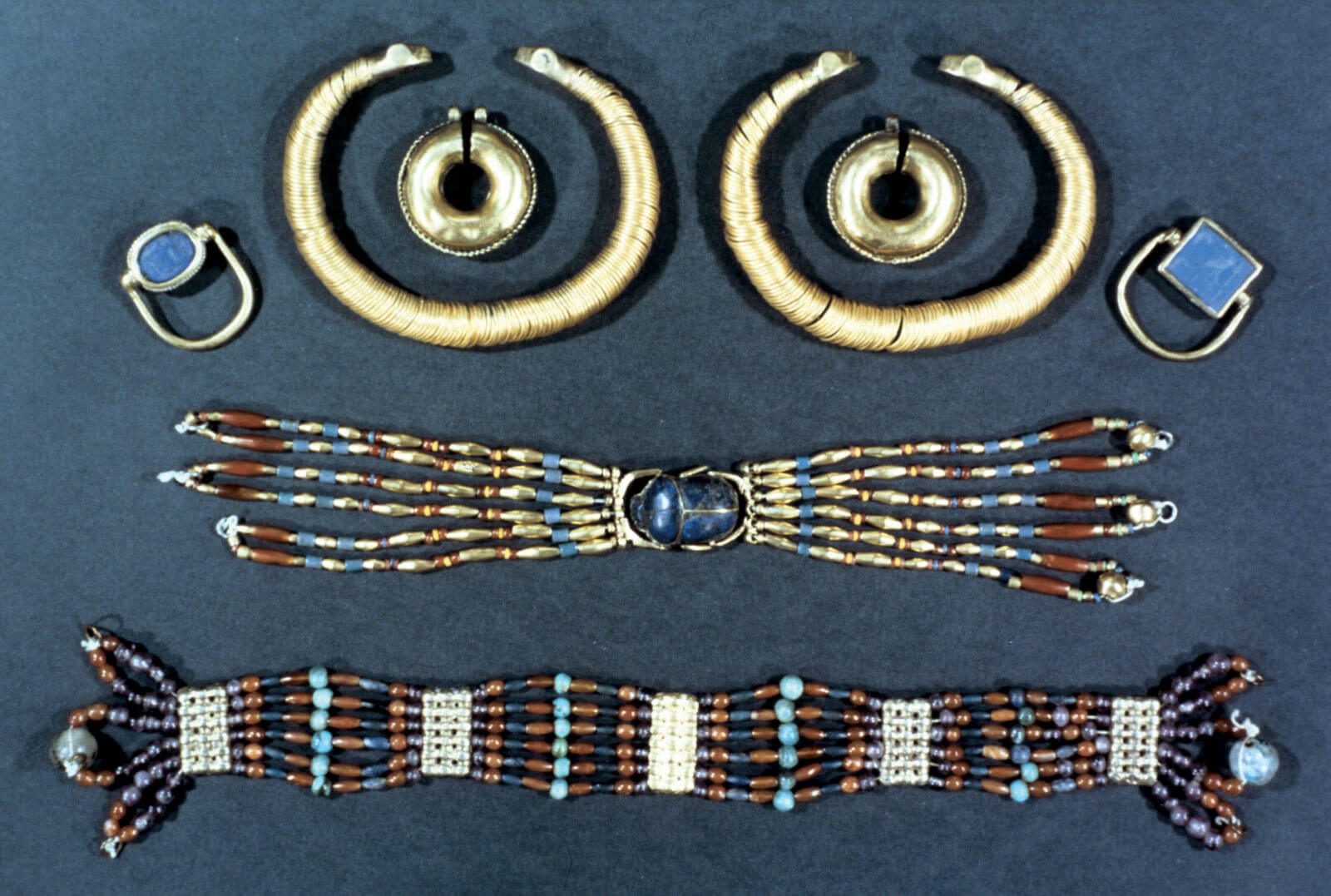 The Importance of Jewelry When Studying a Culture

When investigating a culture, jewelry is never something to be discredited as less important than another subject or aspect of a culture and can perhaps tell us as much or even more about a culture than its significant works of art (paintings, poems, stories, etc.)

Ancient Egyptian jewelry itself provides an important lens through which to look at burial trends and other ritualistic practices. By investigating various pieces of jewelry, one can learn much about Egypt’s manufacturing process and prowess, not to mention learn more about how ancient Egyptians used resources around them for material availability.

In ancient Egypt especially, jewelry was believed to provide apotropaic powers that supposedly gave the wearer the ability to cast away evil or misfortune.

The color and material of a piece of jewelry were also hugely important in ancient Egypt. Certain gems would protect from disease while a person was alive and other gems, when wrapped within mummy bandages, provided protection in the afterlife. The Book of the Dead gives advice for specific materials to use with certain amulets, even detailing where on the body to place these protective devices.

Lapis and turquoise were imported gemstones, which made them less available during prosperous times. Carnelian was also used, and purple amethyst was another popular gemstone as well. Glass was often used in royal and elite jewelry. 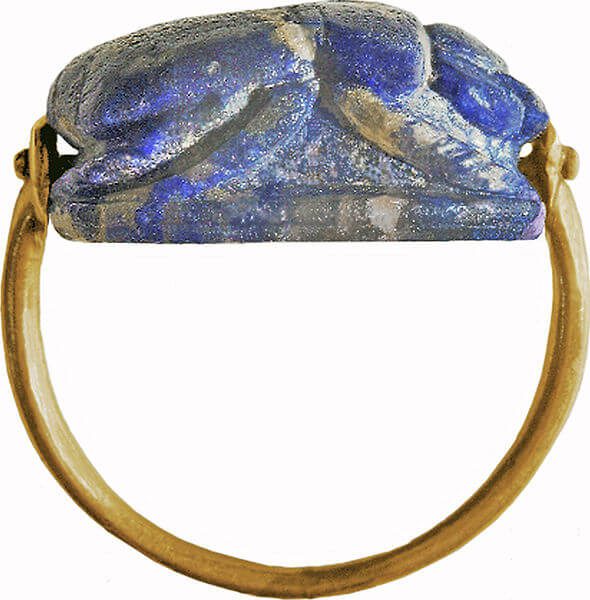 For more information on specific ancient Egyptian jewelry and the inspiration behind their design, feel free to check out our blog, Ancient Egyptian Jewelry Worn in Life and Death.

One of the most sensational archeological discoveries of all time was the tomb of 18th dynasty pharaoh Tutankhamun (1539–1292 BCE).

The discovery of King Tut’s tomb revealed fabulous treasures and gave us a much deeper understanding of the wealth that accompanied a true Egyptian sovereign, in life and in death. His tomb and hidden treasures are also a testament to the amazing Egyptian goldsmithing, now housed in the Egyptian Museum in Cairo. This is the biggest collection of gold and jewelry that we know of in the world.

First of all, Tut’s innermost coffin is ridiculous — made entirely of gold. The mummy itself was also covered (practically encrusted) with a breathtaking number of jewels. Oh yeah, there were also additional jewels and riches found lying around in random cases and boxes — you know, in the many other rooms of the tomb.

Tut’s jewelry included diadems, pectorals, necklaces, amulets, bracelets, earrings, pendants, and rings. The jewelry found in Tut’s tomb was (and is) of superb quality and an extremely high degree of refinement and stands up against any other cultural offering before, during, or since its time.

Just like with the pyramids and The Sphinx, ancient Egypt’s craftsmanship and ingenuity are prominently displayed in their jewelry. If you ever get a chance to take a look at any sort of collection that comes near your neck of the woods, we highly encourage it.

As we continue to explore the history of accessorizing and the jewelry offerings of the cultures that shaped who we are today, we’re here to repair and take care of the jewelry that helped shape you. At My Jewelry Repair, we restore memories, no matter how ancient they may seem.