Ancient Greece & Ancient Rome – The History of Jewelry Around the World

As you might already know from reading our first entry into this series, The Oldest Jewelry in the World, the earliest evidence of savvy accessorizing is dated back from around 135,000 years ago. It was a simple necklace made of eagle talons found in Croatia.

Whether this necklace was worn by an ancient princess gifted to her by a suitor of sorts, or if it was an emblem of class, gender, occupation, etc., jewelry and accessories will often tell us much about a culture — ours included!

We’ve already covered cultures like Sumer and Ancient Egypt and how they accessorized and differentiated themselves amongst each other during ancient times. Our next logical historical step is to land in ancient Rome and Greece to take a look at their jewelry and accessory contributions. 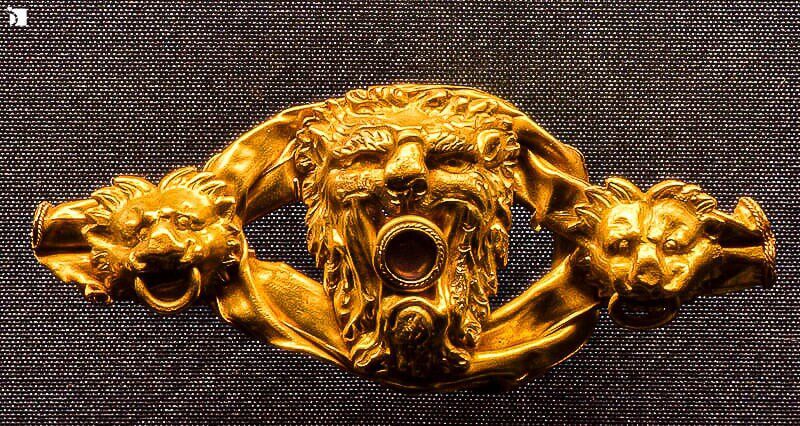 A Lack of Gold in Greece

Gold was unfortunately not something that was automatically available and at-the-ready in ancient cultures, so, as a result, jewelry was relatively hard to come by in Archaic (c. 750–c. 500 BCE) and Classical (c. 500–c. 323 BCE) Greek culture.

Greek jewelry has a predominant characteristic which one might be able to guess on their own: Sculpture in miniature, highly detailed, representing isolated figures, generally, but sometimes also religious, mythological, and/or heroic scenes as well.

Greek expansion might be credited for a magnificent era of jewelry in Greece. Thanks to Alexander the Great, conquests of Anatolia in the east, southern Italy in the west, as well as the Balkan Peninsula in the north resulted in a mass Hellenization of the world as humanity knew it at the time.

In the 3rd and 2nd centuries BCE, there was a marked increase in the technical ability of Hellenistic goldsmiths. As a matter of fact, some of the creative works therein have reached the highest levels ever attained throughout history.

Notable examples of accessorizing in ancient Greece include disk earrings bearing pendants of great detail as well as earrings of winged figures driving chariots (such as the one featured in the Museum of Fine Arts in Boston). Even today, the amazing precision of these earrings’ tiny details and their figures’ rhythmic dynamism serve as a microscopic monument to the rich history of the sculptures of mankind. 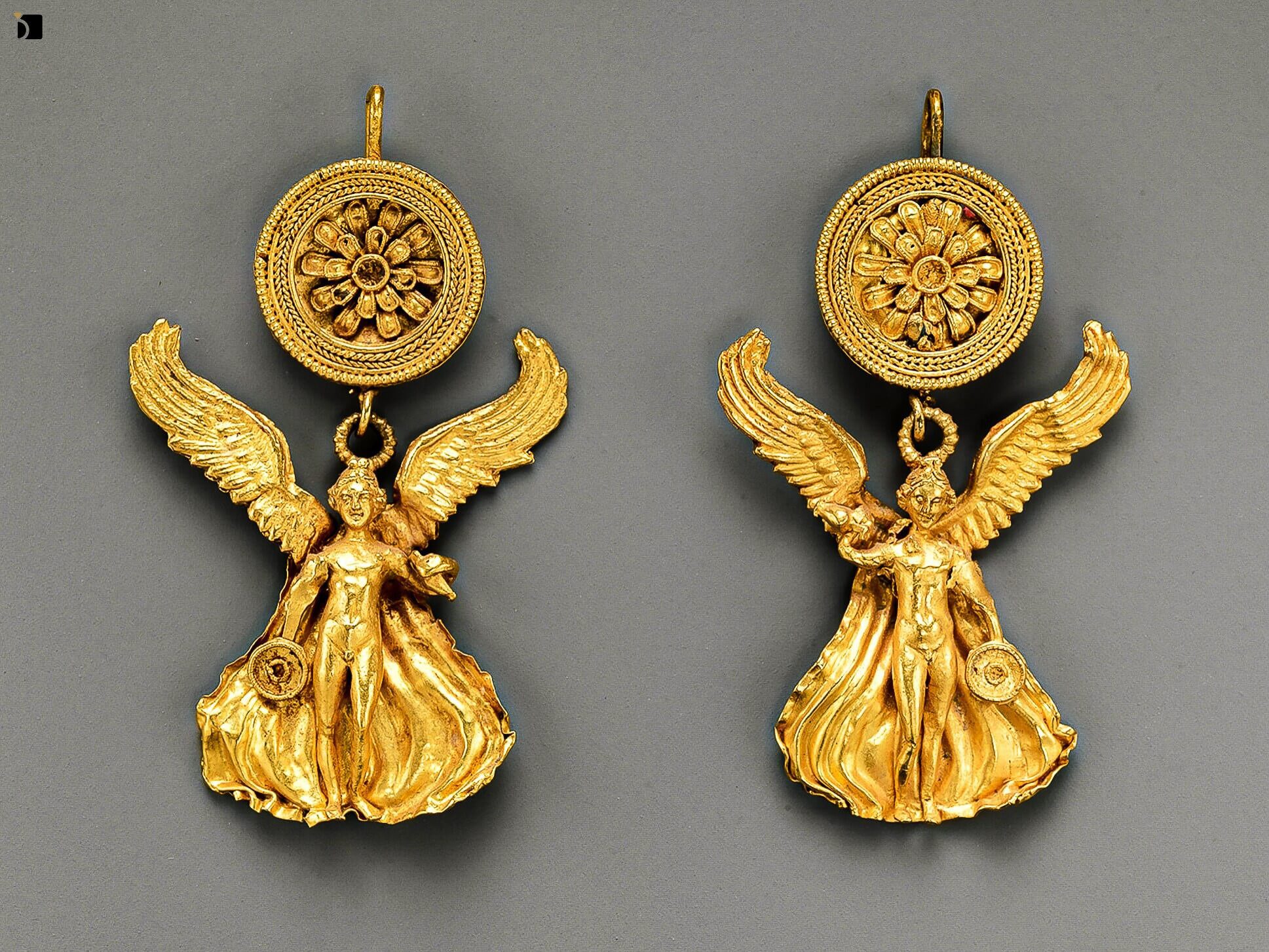 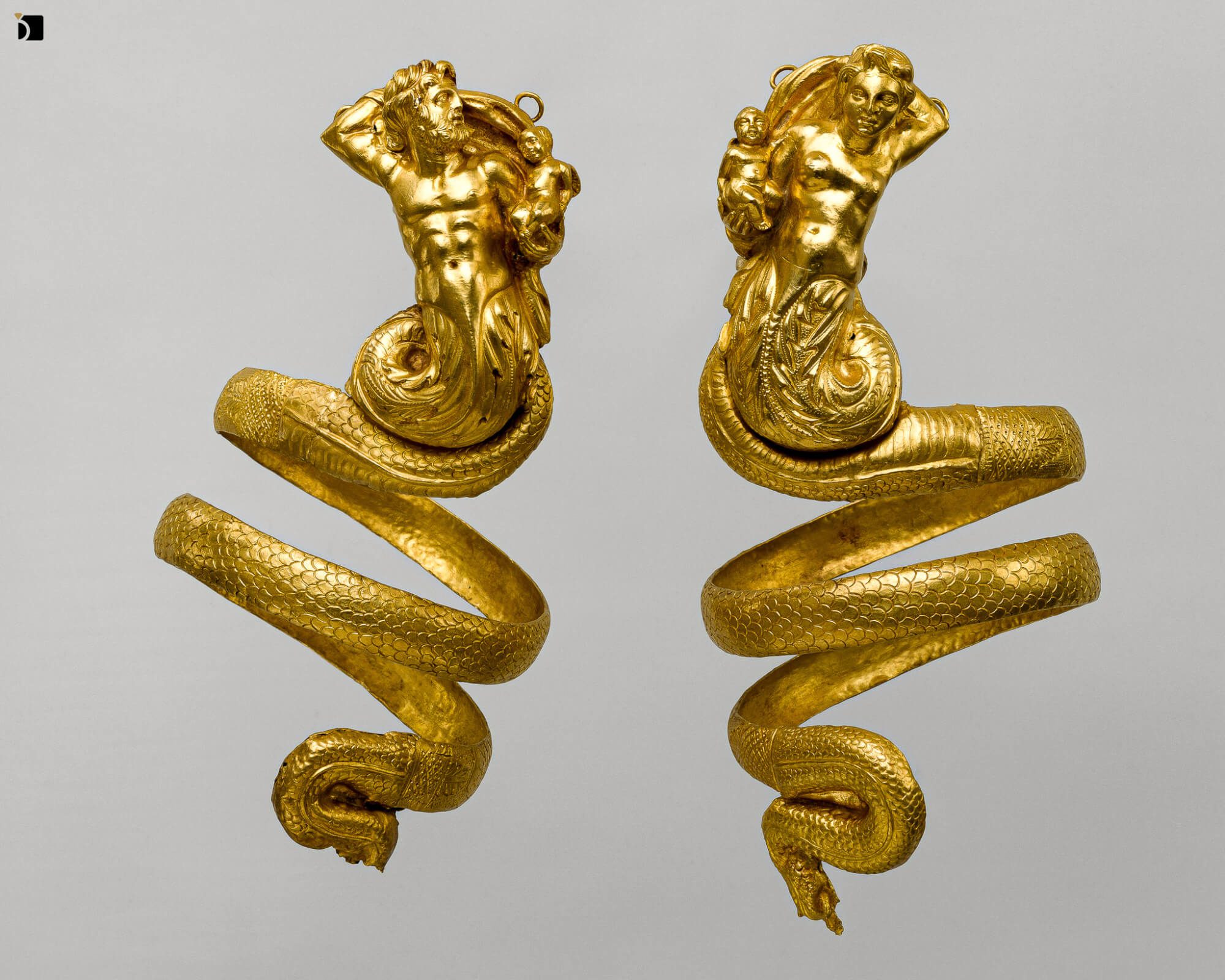 Next, let’s talk about The Hercules Knot!

Magnificent diadems came into wide use as a direct result of ATG’s Persian conquests. One example of which is a diadem which comes in a rigid elliptical shape finished with a Hercules knot in the centre, not to mention pendants hanging down across the forehead.

Necklaces were also commonly worn in ancient Greece, many of which were made of gold pieces that might be fashioned into shapes of acorns, amphorae, and rosettes.

One motif that started in ancient Greece and remained popular in ancient Rome was the serpent shape — used for bracelets and rings.

At Home in Ancient Rome

Ancient Rome is a place where jewelry truly shined… in such a way that humankind had never seen before and wouldn’t see again until the Renaissance. Think of Imperial Rome as a goldsmiths’ Mecca.

Coupled with precious stones and metals brought to Rome came goldsmiths and lapidaries (engravers/cutters/polishers) from Asian and Greek provinces.

The gold ring was a piece of jewelry and an accessory of significance worn by noblemen, ambassadors, senators, and other people of distinction. Gradually, the gold ring began to be available to and worn by persons of lower social rank. Eventually, gold rings were worn by common soldiers.

The Romans didn’t stop with jewelry when it came to their ability to accessorize, either. Many great patrician families of Rome and its great many provinces showed off not only jewels, but also highly detailed household furnishings made of silver and gold — some of which were found in Pompeii and Boscoreale.

Some people might consider the Romans to be outright copycats of ancient Greece, but we’d never say that. However, the serpent motif carried over into ancient Rome, often coiled in a triumphant double spiral (which were largely inspired by Hellenistic examples and models).

The coiled serpent was frequently featured prominently on bracelets, armbands, rings, earrings, and other ancient accessories.

Later, in Pompeii and Rome, jewelry and other accessories began to display a magical nature and were inspired by the heavens — with examples of half-moons as well as the wheel with four spokes (also referred to as The Wheel of Fortune).

Roman jewelry and accessories would eventually free themselves of Hellenistic and Etruscan influences, taking on a life of their own. Colored stones like rubies, emeralds, topazes, pearls, and sapphires began to appear in Roman accessories as the art of jewelry making progressed.

There was also a strong preference for personalized and engraved gems in ancient Rome — including by Caesar himself. Stones were often set beautifully in bezels or were supported by pins. New techniques and technology began to surface as well, including opusinterassile, which was a technique used to decorate gems with tiny, pierced motifs, not to mention niello, which was a method used for enameling and gave artists the ability to decorate accessories like rings and brooches.

The ancient Greeks and Romans contributed greatly to our rich history of jewelry and accessorizing. When it comes time to giving your jewelry, watches, and other accessories the TLC they need to shine through the ages, My Jewelry Repair is here with our iron-clad mail-in repair service.